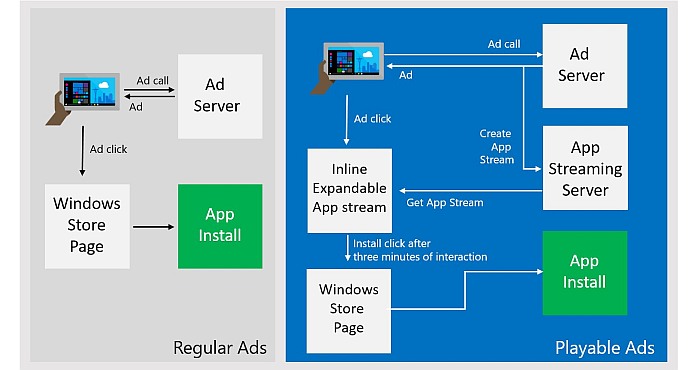 According to Microsoft, you will be able to test windows 10 apps without downloading them. Although, Google was the pioneer of this feature, but Microsoft has noted some flaws in Google’s version and has added it to its own version. This makes Microsoft App ads more enhanced.

How does it work?

Microsoft has just launched the previewed version of the app, and it has been encouraging. This makes us believe that if the ad app is fully launched it will be a better one. The playable ads app allow the user to test apps without been require to download them.

As already said, the App can be tested for 3 minutes – which I believe is enough for a user to know whether the app is what they want or not. However, if you are interested in the app, you will be able to download it by clicking on a link. This will redirect you to the app page where you will be able to download the app. Research shows that users that tested an app before downloading it will be encouraged to use the app more than the user that downloaded the app by just reading the product description.

Playable App will be a way for developers to advertise their product to the users. It is another way to change the way end users interact with their favorite apps, and it is another means of luring users to continue using the apps they’ve tried. The company said that users may not continue to use an app, even though they’ve downloaded it but with Playable Ads, users will be convinced to continue to use the app since they already know what it is.